By submitting this form, I agree that my phone number and email address may receive communications regarding service notices, billing communications, promotions/deals, and other notifications from our company. These messages may be delivered via email, SMS, calls, or voicemails. You can opt-out of SMS communications at any time by replying "STOP". You can opt-out of email promotional communications at any time by clicking the unsubscribe link. Your information is only used internally to provide/offer services and never sold to any 3rd parties. For more information, please review our privacy policy.

Published on Monday, January 23, 2017
This article was tagged under: Firepits and Fire Places

Any landscaping project is in danger of encountering unforeseen problems – that’s a given. While the severity of these issues usually varies, it’s a certainty that something you didn’t expect will rear up and give you trouble when you least expect it.

The mark of a great landscaping company – or any company in general – is knowing how to deal with these issues in a timely, professional manner, and being capable and willing to go the extra mile to deal with the unexpected.

In this customer success story, we’ll talk about a recent customer we had who wanted a patio and landscaping design and overhaul.

You Can Anticipate Some Problems – But Not All Of Them

After the initial consultation at the property, it became quite clear that there were going to be some difficulties creating a new patio and redoing the landscaping around the property – the current concrete patio was severely cracked, and the concrete had settled and sloped toward the house, creating an uneven, dangerous surface.

Part of the problem was drainage – the layout of the yard was such that drainage was poor, and pools of water had a tendency to run towards low ground and settle, which included the now-sloping patio.

In addition, there was a lack of any kind of design flow. The primary patio itself lacked any kind of focal point, and there was actually an additional patio – but it was rarely used.

While we were aware of most of these issues, the full extent of the damage to the concrete patio and the drainage issues were not readily apparent, so we had to deal with those on-the-fly.

Find Solutions That Make Sense – And Will Last 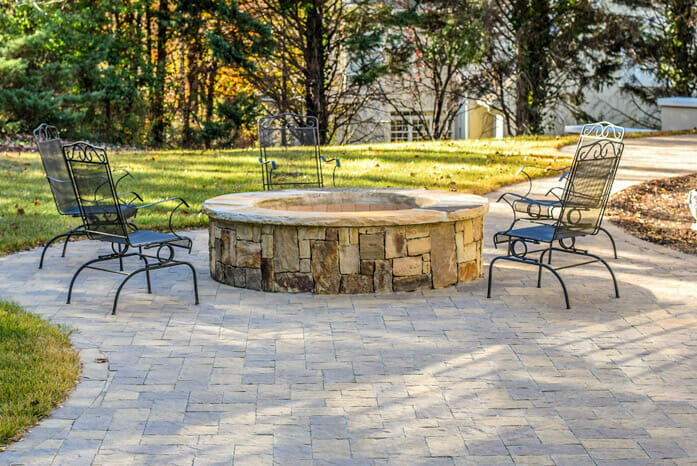 Could we have paved over the concrete patio and just left it be to crack again when water continued to flow towards it and erode its foundation? Sure. Did we? Of course not!

When you come across an unforeseen problem, the worst thing you can do is ignore it. If we ignored the drainage issues of this property, it wouldn’t matter how well we redid this Roswell Georgia patio – it would be broken and cracked in just a couple years.

The first solution was to demo the entire current landscaping solution, allowing us a clean slate from which to build. After that, we brought in heavy-duty graders to regrade the ground on the property, and create a slight angle which supported drainage and channeled water around the house and the patio itself.

After the Roswell landscape demo, new sod was installed on the property, and pavers were added in risky areas both to enhance the aesthetics of the yard, and aid in erosion resistance.

To further ensure water would drain correctly, we modified the current irrigation system to consist of smaller, lower-flow devices across multiple zones, allowing for comprehensive irrigation with less water standing in any given area.

With all that done, it was time to turn to the patio – we completely redid it in a uniform design that incorporated the second patio into a whole, comprehensive unit, and to aid in creating visual interest and a focal point at which people could naturally collect, we added a large, comfortable firepit to the Roswell project, which can be surrounded by plenty of seating. 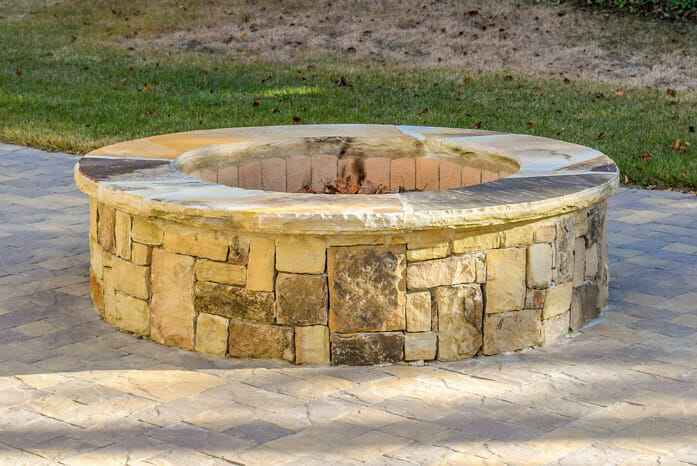 We dug down to the root cause – literally, and ensured not only that we installed a high-quality, beautiful patio, but a comprehensive landscaping solution that would prevent the degradation and destruction of our handiwork by the standing water that had taken such a toll on the previous installation.

Was it a lot of work? Yes. Was it worth it? Absolutely. Would we do it any other way? Of course not. That’s why we’re the best in the business. Call us today to find out more.

Thanks for your feedback! Your comments have been successfully submitted! Please note, all comments require admin approval prior to display.

There is a problem with your comment, please see below and try again.

There have not been any comments left on this post.
Read Our 5-Star Reviews

Complete the form below to submit your request.

By submitting this form, I agree that my phone number and email address may receive communications regarding service notices, billing communications, promotions/deals, and other notifications from our company. These messages may be delivered via email, SMS, calls, or voicemails. You can opt-out of SMS communications at any time by replying "STOP". You can opt-out of email promotional communications at any time by clicking the unsubscribe link. Your information is only used internally to provide/offer services and never sold to any 3rd parties. For more information, please review our privacy policy.